The Ornette pictures relate to our conversation on Tuesday night as to when he put out his work (50s or 60s). The Krapels photographs I randomly found while stolling through the hillside of the web and were too good to let lie alone.

Have you seen what people are doing with their Xbox's? 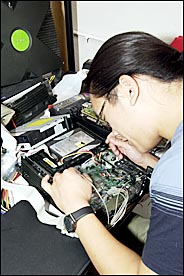 Item originally posted to the a human movement blog